Electron-beam induced carbon contamination is an unwanted side-effect of almost all electron microscopy investigations. Contamination results from electron-beam-induced polymerization of carbon-rich organic molecules on the sample surface, which can be either already present from sample preparation or from adsorption of molecules from the residual gas atmosphere in the microscope [1]. The growth of contamination is unwanted since it covers structures of interest and worsens the lateral resolution. Contamination processes are of special interest for typical SEM energies (≤ 30 keV), where contamination is particularly pronounced. This work aims to quantitatively measure contamination thicknesses and understand the factors that determine electron-beam-induced carbon contamination. The gained knowledge is applied to determine effective cleaning methods.

In this work, contamination patterns were grown in Thermo Fisher Helios G4 FX and FEI DualBeam Strata 400S dual-beam instruments at electron energies between 0.35 and 30 keV. Thin amorphous carbon films (~10 nm) were mainly used as substrates. They were prepared by carbon thread evaporation and were transferred to standard Cu TEM grids. Alternatively, commercial Au, Pd, and Si3N4 films were used to examine the influence of the support material. Contamination was studied by setting up an electron-beam pattern of 3x3 squares with an area of 1 µm2 each. The total dose was controlled by varying the irradiation time of the square between 5 s and 10 min (Figure 1a). Reproducibility of the sample state and microscope setup was checked before any contamination tests by a reference measurement under the same conditions (20 keV and 50 pA electron-beam current).

Figure 1. a) Pattern for electron-beam-induced contamination with numbers in the squares indicating the scan time in seconds. b) Color-coded thickness map of contamination grown at 20 keV on an amorphous carbon film. The thickness of the support film is subtracted.

Figure 2a also shows that tc increases with decreasing electron energy, as expected because of the increased interaction between the specimen and the electron beam at lower energies. The results of such measurements allow us to derive strategies for a practical reduction of contamination by choosing the image-acquisition parameters carefully. Other experiments demonstrate, e.g., that contamination is reduced for a specific dose applied in a short time rather than in a long time. Also, a shorter dwell time in STEM leads to preferential contamination at the edges of the scanned region and reduces contamination in the center. 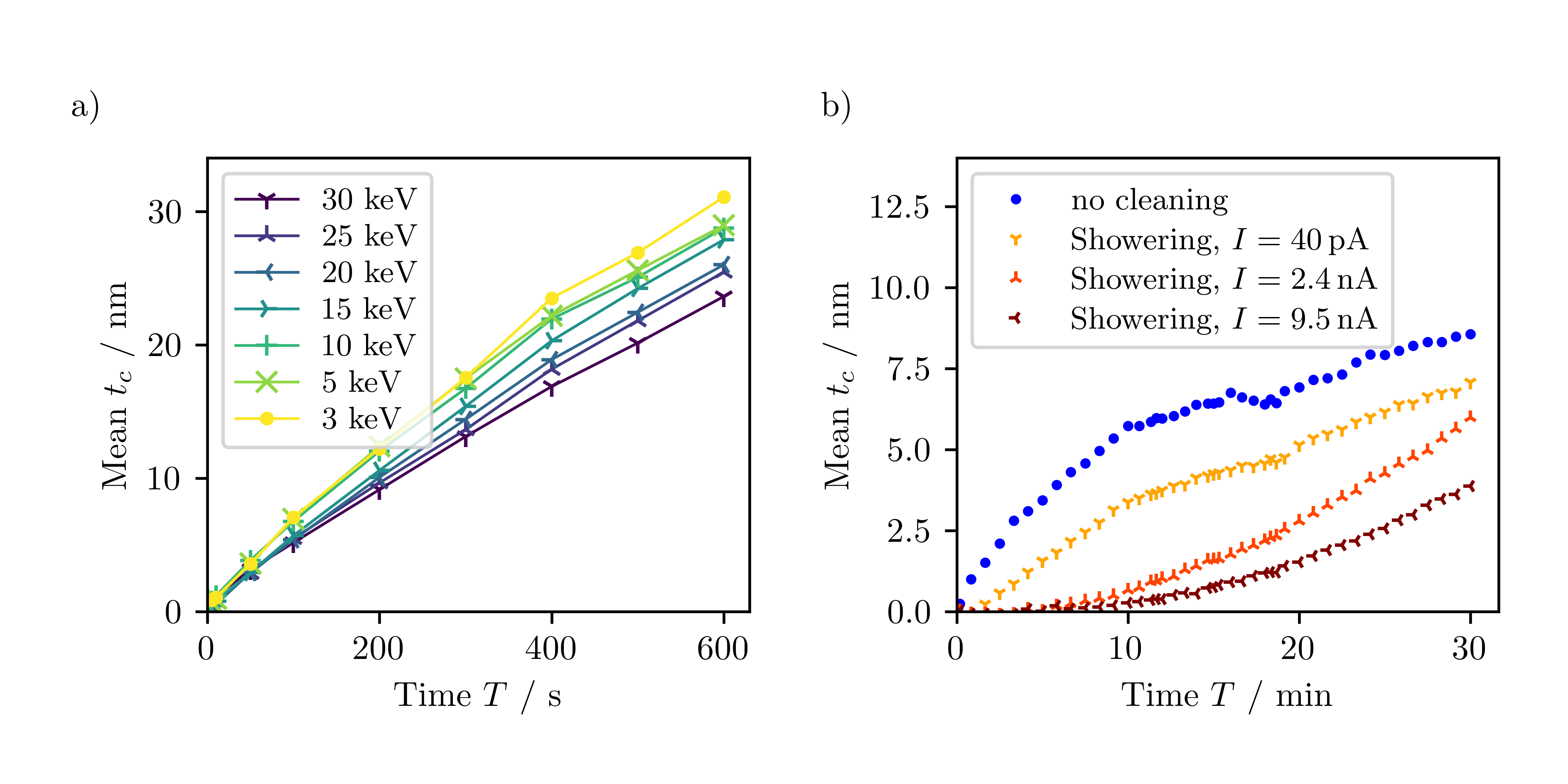 Figure 2. a) Contamination thickness as a function of the scanning time T for different electron energies. b) Beam showering test at 20 keV. After beam showering a 40x40 mm2 region with different beam currents (see legend) for 10 min, the contamination thickness tc of a small 1x1 mm2 patch in the center of the showered region is plotted as a function of the scanning time up to 30 min. The blue data was obtained without beam showering.

In sum, our technique for measuring beam-induced carbon contamination is well-suited to quantitatively investigate contamination growth and test sample cleaning methods. Practical instructions for mitigation of contamination are derived from those results.